My family goes down the shore (we’re from New Jersey, so that’s how we say that we go to the beach) every summer. Me and my mom, dad, brother, aunt, uncle, and grandmother all stay in a house in Long Beach Island for a week. For the last ten years or so, we have been renting in Barnegat Light, a quiet and charming borough at the northern end of the island. 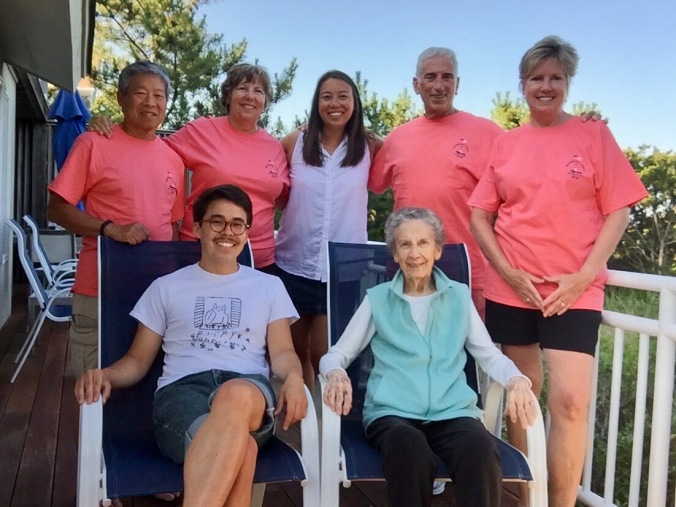 It’s always a lovely and relaxing week, with lots of chatting, reading, sitting out on the deck, and most of all, eating. For the last few years I have been in charge of three meals out of the week, and my uncle (the retired chef) does the rest. Today was one of my days, and I made crabcakes with pasta salad and grilled broccoli.

For the crabcakes, I used:

This made twelve crab cakes, which, along with the rest of the food, was enough to serve six regular eaters and one very light eater.

I mixed the crackers, panko and spices together, and mixed the chives, mayo, mustard, lemon juice and zest, and eggs in another bowl. I added the dry ingredients into the mayo mixture, then folded in the crab meat until  just combined, and formed it into 12 crab cakes. I let them set up in the fridge for about half an hour. Normally I would have fried them off in a little bit of oil on the stove and then finished them in the oven, but to make clean up easier I just baked them. I started with a 400 degree oven and then part way through cranked it up to 425. Once the bottoms were brown (I think it took around 10 minutes,) I flipped them over and then put them back in for about five minutes.

For the pasta salad, I used:

This made plenty to serve as a side for seven people, and a few servings of leftovers.

I cooked the pasta per the directions, but checked it a little earlier than the prescribed time to be sure it didn’t get overcooked. I put the grated onion, carrot and vinegar onto the hot, drained pasta. This is how you start a traditional Hawaiian style mac salad, which I love, but the rest of what I did is not in that style. After the pasta cooled for about 20 minutes, I folded in a bowl with equal parts mayo and ranch dressing (this was my uncle’s suggestion, it came out great!) and the pepper. I left this in the fridge for a few hours, then folded in the diced cucumbers just before serving.

My uncle cooked the broccoli (which I forgot to take a picture of) for me. He cut the crowns into florets, seasoned with some Pam, salt, pepper, and garlic powder, and crisped them up on the grill.