I’m in Breckenridge, Colorado, on vacation with James, my parents, and my aunt and uncle, who have a place in a great place right on Peak 8. I have been here in the winter for ski season, but my favorite trips are always the ones at the end of the summer/early autumn. The weather is perfect for hiking and the aspens are starting to change to a beautiful yellow, standing out on the rolling green mountains all around. 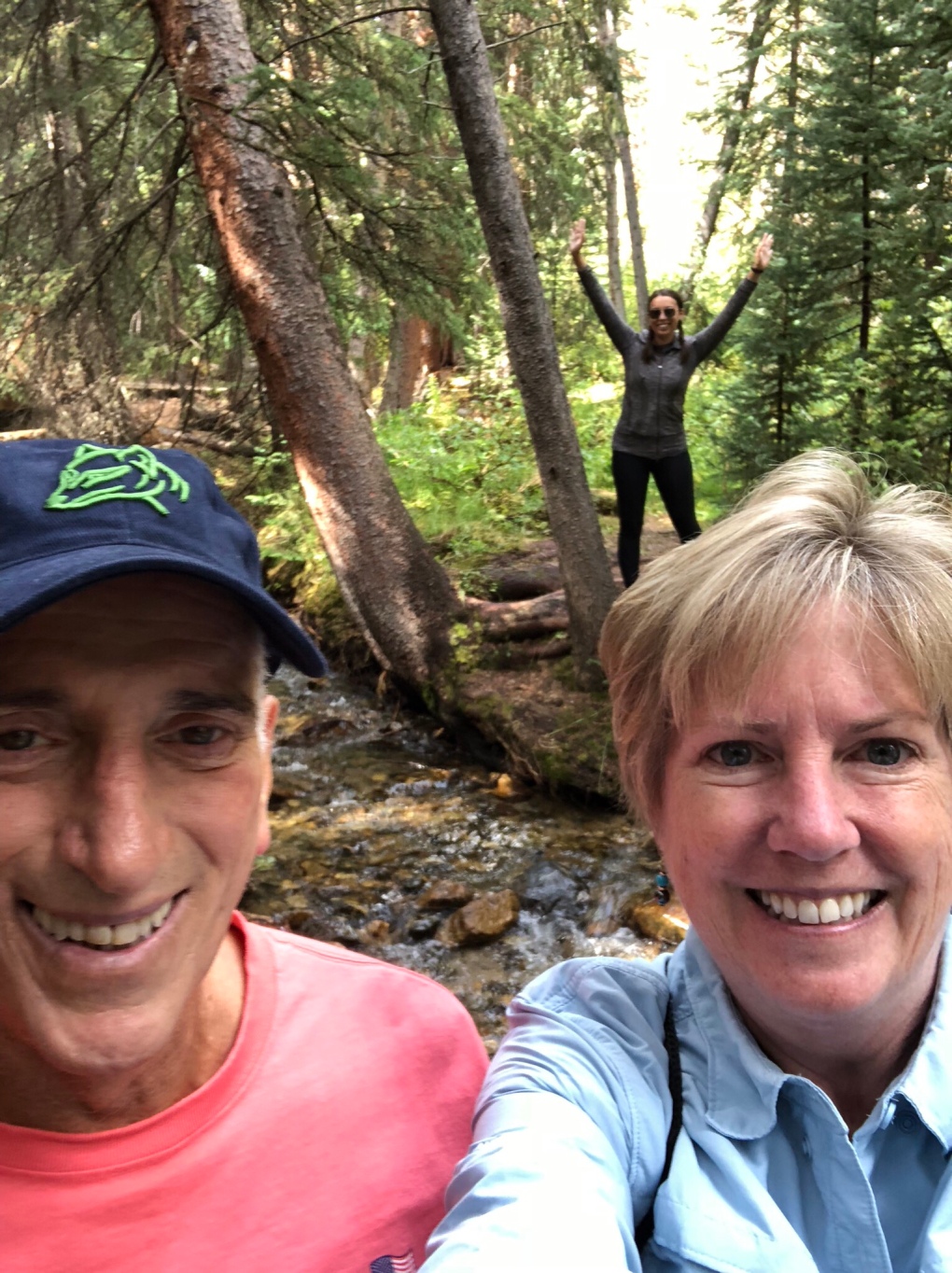 My aunt Kris and uncle Miles, with me in the background

Being up here presents a unique culinary challenge – cooking at altitude. Things are different here at 10,000 feet, and depending on what you are cooking, you may have to make substantial changes. Luckily, I have some help… my uncle, the chef, has been cooking up here for more than 10 years, and has learned a lot from experience. For dinner tonight, I kept it pretty simple, since we were out doing stuff most of the day. I made lamb loin chops, cous cous, and roasted carrots. I took a lot of shortcuts (i.e. boxed couscous, sliced onions, and pre-made tzatziki) because it’s vacation and who wants to spend the whole time cooking?

I did the carrots first. James peeled them for me, so all I had to do was slice and spread them out on a baking sheet with a drizzle of vegetable oil, a few turns of salt and a sprinkle of dried dill. I did them at 400F degrees, flipping once, until they were nice and brown on both sides. I started with a two pound bag; it looked like a lot in the store but after they cooked down there was barely enough for six people to have a satisfying portion. 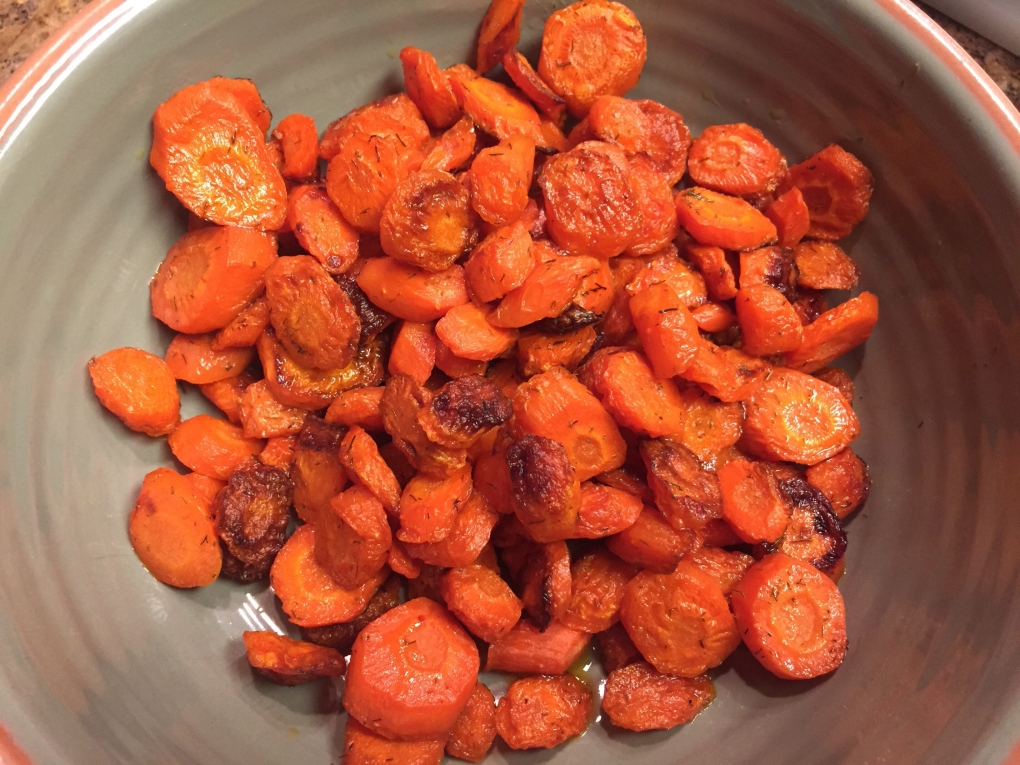 For the other side, I made couscous. I used a boxed kind – you can get plain stuff without the seasoning packets, but when you’re traveling and cooking in a vacation home kitchen with limited (or no) spices, bullions, and condiments, the packaged stuff isn’t the worst idea. To spice it up, I added some seasonings I found in the unit, and cooked up an onion and some mushrooms for texture. I used:

Two boxes of instant couscous, one parmesan flavor and one garlic and olive oil.

8 ounces of sliced mushrooms (I always cut my own at home but once again it is vacation, so I felt okay about cheating)

A splash of dry white wine

A tablespoon and a half of salted butter 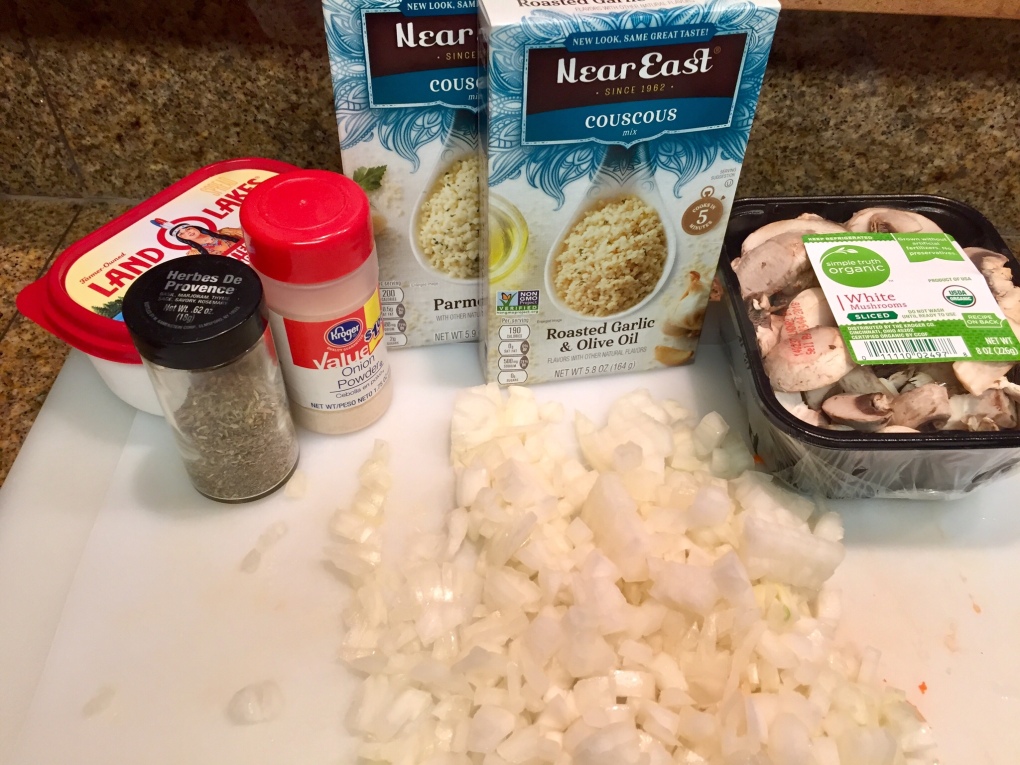 I started by cooking down the onions with salt and the spices in a little olive oil until soft, then added the mushrooms, which I cooked until tender and brown. I used the wine to deglaze the pan. Once it had cooked out, I added the water. The high altitude directions said 1 1/3 cup water per box, and to add two minutes to the resting time. My uncle explained that at this altitude, water boils at a lower temperature, so more of it boils off (evaporates) than would at sea level, and if you are boiling anything, it takes longer, since it is cooking at a lower temp.

I added a little extra to account for the water that would be absorbed by the onions and mushrooms, to account for the extra time it would be sitting before serving, and because this is a very high altitude, for a total of about four cups of boiling water, which was definitely too much. I also added a tablespoon and a half of butter and the seasoning packets. I let it boil for half a minute, then added the couscous, covered it, removed it from the heat and let it sit until I was ready to serve, about half an hour later. About 15 minutes in, I threw a paper towel on top and put the lid back on. This was a helpful suggestion from my uncle about how to pull some of the moisture out of the couscous without putting it back on the heat.

For the protein, I used two Costco packages of lamb loin chops, a total of 16 chops, which was more than enough for six people and a few helpings of leftovers. I brushed the steaks with a few tablespoons of olive oil mixed with herbs de provence and dried dill, and seasoned with salt and pepper. James and my uncle took them out and seared them off on the grill for just a few minutes a side. Then they brought them in and finished them in the oven at 400F degrees until medium rare. The steaks were all different sizes, so they had to come out of the oven in a few different batches to be sure they were all cooked just right. 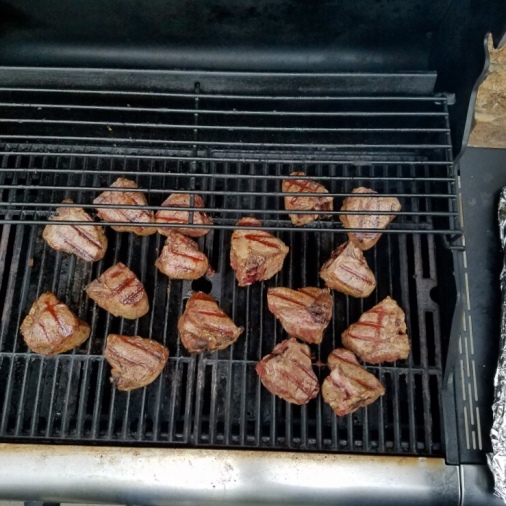 It definitely wasn’t a fancy meal, but it was tasty, low-stress, and it didn’t take long, which is just what you want on vacation!

One thought on “Lamb and Couscous in Colorado”